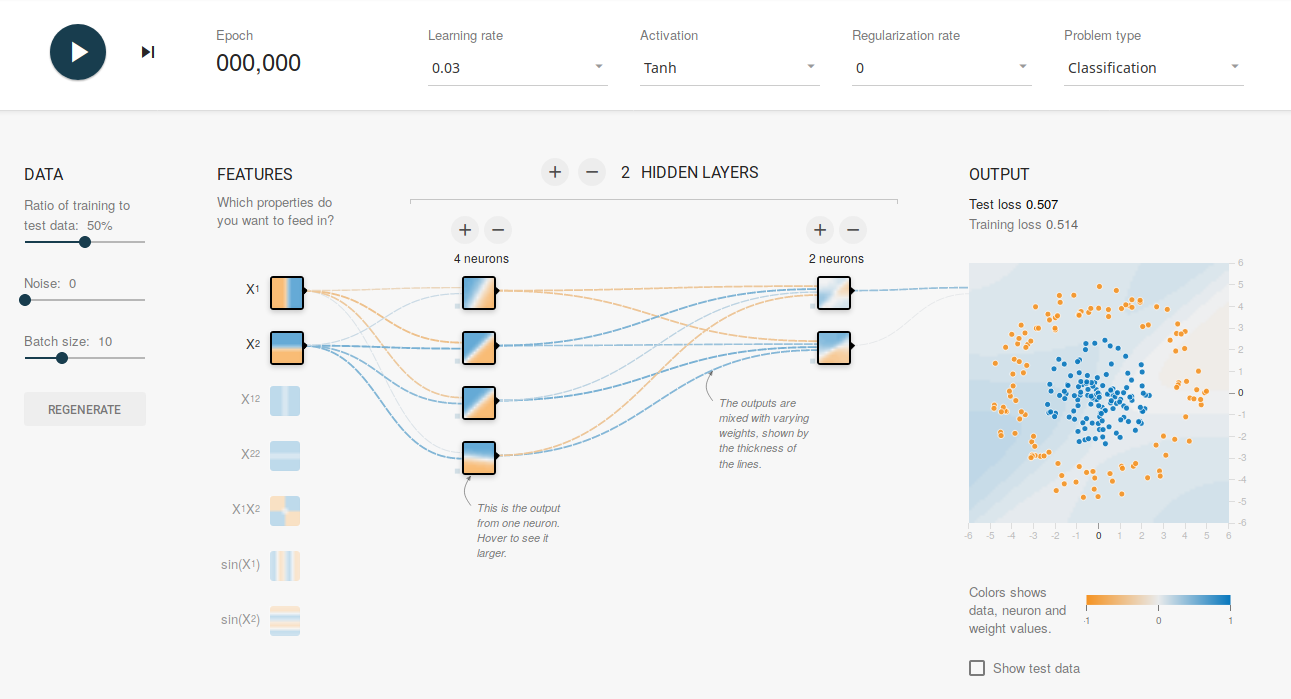 Play "which face is real"

Try to identify which images are real photographs and which ones were generated using Generative Adversarial Networks. 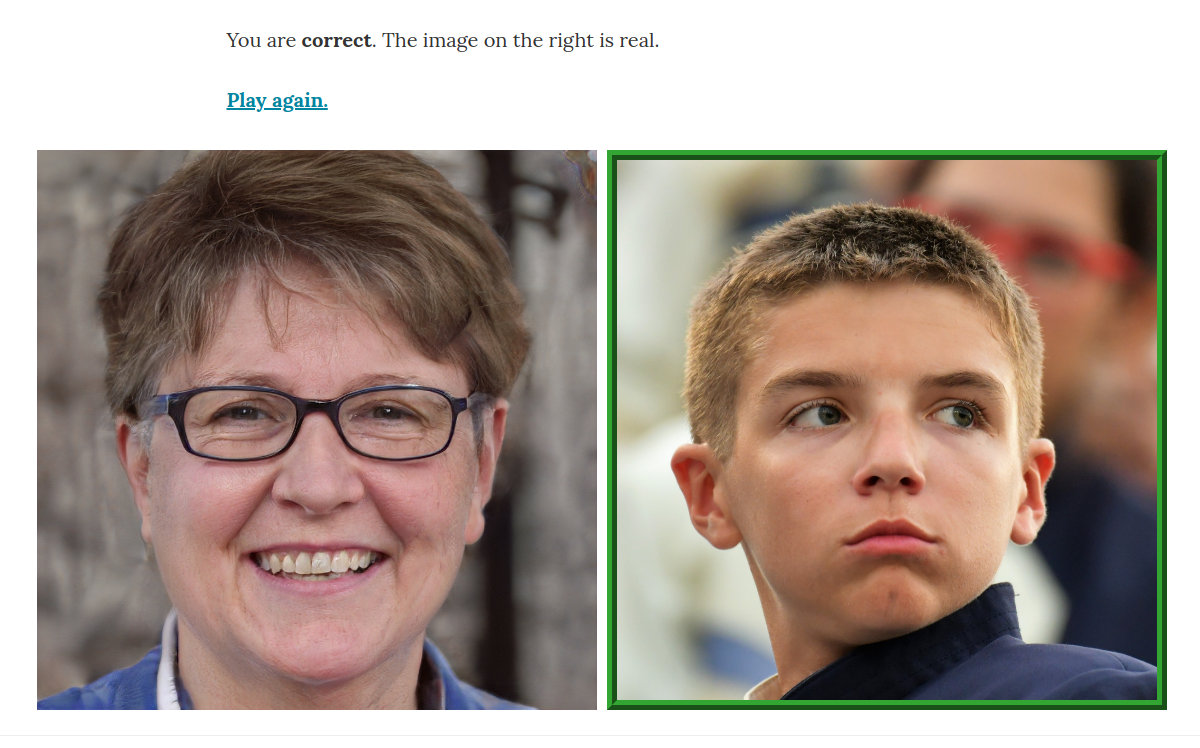 Ultra-high energy cosmic rays (UHECRs) are highly energetic particles originating from outer space. With energies higher than 10¹⁸ eV they are the highest energetic particles found in nature. The energies are even several orders of magnitude larger than the particles accelerated by the most powerful colliders at Earth. Measuring the properties like arrival direction, mass and energy of the cosmic rays could help to identify the sources of these particles. This would help to understand the universe and the physics at the sources.

Measuring these very rare particles is a challenging task. Because of their high energies, the particles interact with the air molecules when penetrating the Earth's atmosphere, which lead to extensive particle cascades called air showers. The footprints of such air showers can extent over several square kilometres when arriving at the surface of the Earth. The largest UHECR experiment is the Pierre Auger Observatory placed in Argentina.

The Pierre Auger Observatory located in Malargüe is the world's largest cosmic-ray observatory and is operating since 2008. The observatory is a "hybrid detector" consisting of two independent detector types: flourescence telescopes and water-Cherenkov detectors. Overall 1660 water-Cherenkov stations with a spacing of 1500 m form the 3000 km² (3 times the size of Berlin) large surface detector of the experiment, and measure the secondary particles of the cosmic-ray induced airshowers on ground level. This surface-detector array is overlooked by 27 fluorescence telescopes grouped at four locations which measure the fluorecence light which is produced by the particle cascade.

The breakthrough of deep learning was around 2012 when the error rates in speech recognition and computer vision were reduced massively. Since then, deep learning has become the leading approach in most machine learning applications. The success was driven by growing computing performance (GPUs), new developed algorithms and big data, which enables training deep networks for the first time. Although great progress has been made the last years, in physics research the usage of deep learning based methods has only recently begun.

Adapting latest Deep-Learning algorithms for physics research i.e. for air shower reconstruction at the Pierre Auger Observatory, is the focus of my research.

Tutorial about Graph Convolutional Neural Networks. Tutorial contains slides about basic theory on graphs and convolutions. Convolutions in the spatial and the spectral domain are discussed and explained using code examples. Slides and code are available.

Tutorial about Generative Adversarial Networks (GANs) given at CERN during the IML Workshop 2019. Tutorial contains slides and code.

Or just open the tutorial via binder:

Tutorial on GANs and Wasserstein GANs. Covering the basic theory about the Wasserstein distance and related similarity distances and divergences for high-dimensional spaces. For code see the example section at VISPA.

We present a new approach for the identification of ultra-high energy cosmic rays from sources using dynamic graph convolutional neural networks. These networks are designed to handle sparsely arranged objects and to exploit their short- and long-range correlations. Our method searches for patterns in the arrival directions of cosmic rays, which are expected to result from coherent deflections in cosmic magnetic fields. The network discriminates astrophysical scenarios with source signatures from those with only isotropically distributed cosmic rays and allows for the identification of cosmic rays that belong to a deflection pattern. We use simulated astrophysical scenarios where the source density is the only free parameter to show how density limits can be derived. We apply this method to a public data set from the AGASA Observatory.

In recent years, great progress has been made in the fields of machine translation, image classification and speech recognition by using deep neural networks and associated techniques. Recently, the astroparticle physics community successfully adapted supervised learning algorithms for a wide range of tasks including background rejection, object reconstruction, track segmentation and the denoising of signals. Additionally, the first approaches towards fast simulations and simulation refinement indicate the huge potential of unsupervised learning for astroparticle physics. We summarize the latest results, discuss the algorithms and challenges and further illustrate the opportunities for the astrophysics community offered by deep learning based algorithms.

The surface-detector array of the Pierre Auger Observatory measures the footprint of air showers induced by ultra-high energy cosmic rays. The reconstruction of event-by-event information sensitive to the cosmic-ray mass, is a challenging task and so far mainly based on fluorescence detector observations with their duty cycle of ≈ 15%. Recently, great progress has been made in multiple fields of machine learning using deep neural networks and associated techniques. Applying these new techniques to air-shower physics opens up possibilities for improved reconstruction, including an estimation of the cosmic-ray composition. In this contribution, we show that deep convolutional neural networks can be used for air-shower reconstruction, using surface-detector data. The focus of the machine-learning algorithm is to reconstruct depths of shower maximum. In contrast to traditional reconstruction methods, the algorithm learns to extract the essential information from the signal and arrival-time distributions of the secondary particles. We present the neural-network architecture, describe the training, and assess the performance using simulated air showers.

Simulations of particle showers in calorimeters are computationally time-consuming, as they have to reproduce both energy depositions and their considerable fluctuations. A new approach to ultra-fast simulations are generative models where all calorimeter energy depositions are generated simultaneously. We use GEANT4 simulations of an electron beam impinging on a multi-layer electromagnetic calorimeter for adversarial training of a generator network and a critic network guided by the Wasserstein distance. In most aspects, we observe that the generated calorimeter showers reach the level of showers as simulated with the GEANT4 program.

We use adversarial frameworks together with the Wasserstein distance to generate or refine simulated detector data. The data reflect two-dimensional projections of spatially distributed signal patterns with a broad spectrum of applications. As an example, we use an observatory to detect cosmic ray-induced air showers with a ground-based array of particle detectors. First we investigate a method of generating detector patterns with variable signal strengths while constraining the primary particle energy. We then present a technique to refine simulated time traces of detectors to match corresponding data distributions. With this method we demonstrate that training a deep network with refined data-like signal traces leads to a more precise energy reconstruction of data events compared to training with the originally simulated traces.

We describe a method of reconstructing air showers induced by cosmic rays using deep learning techniques. We simulate an observatory consisting of ground-based particle detectors with fixed locations on a regular grid. The detector’s responses to traversing shower particles are signal amplitudes as a function of time, which provide information on transverse and longitudinal shower properties. In order to take advantage of convolutional network techniques specialized in local pattern recognition, we convert all information to the image-like grid of the detectors. In this way, multiple features, such as arrival times of the first particles and optimized characterizations of time traces, are processed by the network. The reconstruction quality of the cosmic ray arrival direction turns out to be competitive with an analytic reconstruction algorithm. The reconstructed shower direction, energy and shower depth show the expected improvement in resolution for higher cosmic ray energy.

I'm a PhD student at RWTH Aachen University, Germany. Currently, I am investigating machine learning algorithms in the context of particle and astroparticle physics. I am interested in generative models, graph networks and the application of deep-learning techniques in physics analysis.

As a member of the Pierre Auger Collaboration, a second part of my work is dedicated to the physics of ultra-high energy cosmic rays. Within the Collaboration I am taskleader of the "Auger Machine Learning Task". I studied physics at RWTH Aachen University and worked with the AMS-02 experiment during my bachelor studies. Further I investigated the detector backgrounds for future linear colliders during an internship at DESY. In my master's degree I focused on high-energy physics, datascience and astroparticle physics. With the beginning of my master thesis in 2016 (or rather my PhD thesis in 2017) my research interests are focused on machine learning in physics.

I enjoy breaking down and understanding complex things. As I really love teaching I like to understand things in detail to explain them well. I believe in open, reproducible and international research.

In my spare time I like to go running and playing football with friend. In quiet moments I love to play the piano. I truely enjoy hiking, travelling and taking pictures of the nature and wild animals all over the world.